Obsessive-compulsive disorder (OCD), formerly considered a type of anxiety disorder, is now regarded as a unique condition. It is a potentially disabling illness that traps people in endless cycles of repetitive thoughts and behaviors. People with OCD are plagued by recurring and distressing thoughts, fears, or images (obsessions) they cannot control. The anxiety (nervousness) produced by these thoughts leads to an urgent need to perform certain rituals or routines (compulsions). The compulsive rituals are performed in an attempt to prevent the obsessive thoughts or make them go away.

Although the ritual may temporarily alleviate anxiety, the person must perform the ritual again when the obsessive thoughts return. This OCD cycle can progress to the point of taking up hours of the person’s day and significantly interfering with normal activities. People with OCD may be aware that their obsessions and compulsions are senseless or unrealistic, but they cannot stop them.

What Are the Symptoms of OCD?

The symptoms of OCD, which are the obsessions and compulsions, may vary. Common obsessions include:

Although the exact cause of OCD is not fully understood, studies have shown that a combination of biological and environmental factors may be involved.

Biological Factors: The brain is a very complex structure. It contains billions of nerve cells — called neurons — that must communicate and work together for the body to function normally. Neurons communicate via chemicals called neurotransmitters that stimulate the flow of information from one nerve cell to the next. At one time, it was thought that low levels of the neurotransmitter serotonin were responsible for the development of OCD. Now, however, scientists think that OCD arises from problems in the pathways of the brain that link areas dealing with judgment and planning with another area that filters messages involving body movements.

In addition, there is evidence that OCD symptoms can sometimes get passed on from parents to children. This means the biological vulnerability to develop OCD may sometimes be inherited.

Studies also have found a link between a certain type of infection caused by the Streptococcus bacteria and OCD. This infection, if recurrent and untreated, may lead to the development of OCD and other disorders in children.

Environmental Factors: There are environmental stressors that can trigger OCD in people with a tendency toward developing the condition. Certain environmental factors may also cause a worsening of symptoms. These factors include:

How Common Is OCD?

About 3.3 million adults and about 1 million children and adolescents in India have OCD. The disorder usually first appears in childhood, adolescence, or early adulthood. It occurs about equally in men and women and affects people of all races and socioeconomic backgrounds.

How Is OCD Diagnosed?

There is no lab test to diagnose OCD. Psychiatrist in Delhi bases his or her diagnosis on an assessment of the patient’s symptoms, including how much time the person spends performing his or her ritual behaviors.

How Is OCD Treated?

OCD will not go away by itself, so it is important to seek treatment. The most effective approach to treating OCD combines medications with cognitive behavioral therapy.

In severe cases of OCD and in people who do not respond to medical and behavioral therapy, electroconvulsive therapy (ECT) or psychosurgery may be used to treat the disorder. During ECT, a small current is passed through electrodes placed on the scalp while the patient is asleep under general anesthesia This causes a brief seizure. Repeated ECT treatments have been found to help improve OCD symptoms in some cases. A newer, surgical form of brain stimulation called deep brain stimulation (DBS) involves implanting small electrodes into brain areas that are a part of the brain circuitry associated with OCD symptoms.

What Is the Outlook for People With OCD?

In most cases, OCD can be successfully treated with medication, cognitive behavioral therapy, or both. With ongoing treatment, most people can achieve long-term relief from symptoms and return to normal or near-normal functioning.

Can OCD Be Prevented?

OCD cannot be prevented. However, early diagnosis and treatment can help reduce the time a person spends suffering from the condition.

Meet Dr. Prashant Goyal, psychiatrist in Dwarka, for the best treatment of the obsessive compulsive disorder. 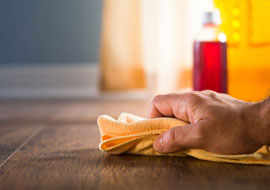